Butter cream (also known as buttercream, butter icing or mock cream) is a type of icing used inside cakes, as a coating, and as decoration. In its simplest form, it is made by creaming butter with powdered sugar, although other fats can be used, such as margarine. Colorings and flavorings are often added, such as cocoa powder or vanilla extract.

Simple buttercream
Simple buttercream, also known as American buttercream, is made by creaming together fat and powdered sugar (also known as "icing" or "confectioner's" sugar) to the desired consistency and lightness. Small quantities of whole eggs, egg whites, egg yolks, or milk may be included. Some recipes also call for non-fat milk solids. Due to a high sugar content, the frosting can form a thin crust, which prevents sticking.

Decorator's buttercream
Sometimes called Rose Paste, this buttercream is creamed much less than a regular simple buttercream resulting in a stiff paste suitable for making flowers and other cake decorations. It is usually the sweetest of all the buttercreams.

Butter
Sweet cream unsalted butter is traditionally the fat of choice for buttercreams, as evidenced by the name. Butter provides a more delicate texture and superior flavor and mouthfeel (texture) when compared to vegetable shortening. Butter melts at a lower temperature, though, making it more difficult to use. The coloring provided by the butter is slightly off-white in the final frosting.

Margarine
Hydrogenated vegetable shortenings (margarine) have become a popular ingredient in commercial icings during the 20th century because they are cheaper and more stable at room temperature than butter. Icings made with vegetable shortening are more stable in warm temperatures and therefore easier to work with than butter. The whiter color is also favored, especially for wedding cakes. However, shortening does not dissolve in the mouth like butter, leading to a heavy, greasy feel inside of the mouth. The flavor of the buttercream is also not as intense, and the resulting product raises health concerns due to the presence of polyunsaturated and trans fats.

Most buttercreams can be left at room temperature without melting. Buttercreams made with shortening and a higher sugar content withstand warmer temperatures better than those made solely with butter. Cooling buttercream will cause it to harden. If a frosted cake is cooled, the buttercream may crack.

When using buttercream to frost a cake, it is best to work with it when it is soft and spreadable. Icings may be stored, covered, in the refrigerator for several days. Before use, the icing needs to sit outside the fridge so it can come up to room temperature. If it must be warmed quickly or if it curdles, it can be heated over warm water (such as a bain marie or double boiler) and beaten until it becomes smooth again. Avoid directly heating the buttercream.


(From Wikipedia, the free encyclopedia)

Email ThisBlogThis!Share to TwitterShare to FacebookShare to Pinterest
Labels: My Stories

Feel free to browse through my site and if something interest you, please do not hesitate to email or text me.

Thanks for visiting ^_^
Regards,
Suhana

Peace be upon you and Good Day.

3. You can choose design from our previous order or should you have your own ideas, I would love to hear it from you.

4. Please email your completed details order to bakemecupcake@yahoo.com or you can whatsapp to us.

Kindly allow 48hours for us to reply your email.

Note : Only completed details will be processed. 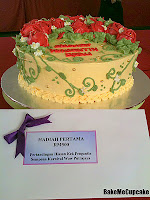